About the design of the European Union

To bring together and hopefully consolidate some of the main arguments I have propounded over an extended series of articles, I here examine the Union’s rule-forming-rule-making architecture.

Given the scope of the topic, this analysis does not cover the institutions of the European Central Bank and the Court of Justice of the EU, not so because they may not have an impact on policy but only due to their function as the monetary and the judiciary respectively.

Though I would rather rely only on words and conceptual analysis, I have created a simple illustration that may help guide our thinking: 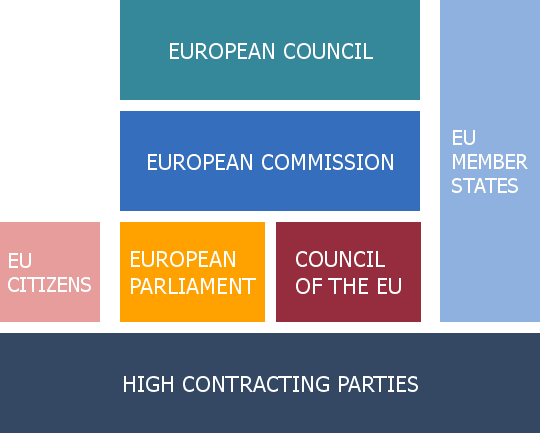 The lack of artistic elegance notwithstanding, this is supposed to be a representation of the general structure of the EU. It resembles an edifice, with the lower part being the foundation, the side parts are the columns that hold together the middle levels, which are the locus of day-to-day European affairs.

The Union as an inter-state formation

Starting from the basis, the European Union is not an independent state. It is an inter-state organisation founded on international treaties. The contracting parties of those treaties are the Union’s Member States.

Article 1 of the Treaty on European Union reads thus:

By this Treaty, the HIGH CONTRACTING PARTIES establish among themselves a EUROPEAN UNION, hereinafter called “the Union”, on which the Member States confer competences to attain objectives they have in common.

This Treaty marks a new stage in the process of creating an ever closer union among the peoples of Europe, in which decisions are taken as openly as possible and as closely as possible to the citizen.

The Union shall be founded on the present Treaty and on the Treaty on the Functioning of the European Union (hereinafter referred to as “the Treaties”). Those two Treaties shall have the same legal value. The Union shall replace and succeed the European Community.

What we learn from Ar. 1 TEU is the following:

The very nature of the EU as an inter-state formation implies the following:

The right pillar on the illustration presents the Union’s Member States as supporting the entire edifice. Apart from nation states being the contracting parties, national governments are involved in every part of the political life of the EU.

Starting from the top, the heads of state or government congregate as European Council, whether in regular meetings or extraordinary ones, to engage in the process of formulating the Union’s political direction. I call this the exercise of rule formation.

The European Council is not the executive of the Union, in the sense that it does not deal with the particularities of administrating every area of policy that falls within the EU’s competences. It is best understood as the political strategist, the institution which provides the general direction and lays the parameters within which technical measures are established (hence, rule formation).

Rule making via the legislative procedure

The entity tasked with fleshing out those technicalities is the European Commission (hereinafter referred to as the Commission). This is the Union’s executive. In the 2014 European elections, a certain process took place by which the leading candidate of the winning group was to become president of the Commission. The German word for “leading candidates”, spitzenkandidaten, is often used to describe this process; one that has been lauded by parliamentarians as a bold step in the direction of making the Commission more democratic.

While there may be an intrinsic value in there being spitzenkandidaten, I very much doubt the function they perform in “democratising” the Union’s executive. The reason is two-fold:

The Commission is the institution which initiates the rule making procedures. Though the practical details are not pertinent to this article, we may note the following:

The Council of the EU as an inter-state platform

As we are on the topic of inter-governmentalism and the importance of the right pillar in the illustration (EU Member States), attention should be given to the Council of the European Union. Unlike the European Council, it participates in the rule making process, dealing with the specifics of every piece of law. The Council’s peculiarities reflect two of the Union’s features:

EU Member States are thus involved in every step of the process, from forming the rules, to actually making them. The supranational stratum is, as Ar. 1 TEU stipulates, but an extension of the collective will of the Union’s contracting parties.

Further, demographics are the determinant for voting power in both the European Parliament and the Council of the EU. This is problematic, as it offers no means by which the good of the place may indeed be harmonised with the good of the space (the USA model, where the House of Representatives uses demographic criteria, while the Senate has a fixed number of senators for each state, is more successful at striking a balance of interests between competing states and the Union at-large).

Inter-governmentalism therefore becomes this political calculation of always trying to involve the bigger states, which may also furnish an explanation as to why the France-Germany alliance is vital for the European integration process (and also why any narrow focus on “German power” neglects the role of other powerful states in the Union).

The limited scope of European citizenship

In the illustration, EU citizens only support the European Parliament. Theirs is not so much a pillar as it is a scaffold. European citizenship does not enable citizens to do the following:

[see: On the limitations of the European Parliament]

These are the sort of questions that may be posed by a well-meaning yet misinformed pro-european who wants “more Europe” on just about every area of policy. The fact that Member States are republics in their own respect, does not mean that their combination and modes of interoperation thereof necessarily render democratic the supranational sphere.

There are at least three modal features in the composition of the EU distinguishing it from a genuine republic:

The specificities of the Union’s institutional order reflect a fundamental flaw in the architecture of the Union: a mismatch between popular sovereignty and state sovereignty. This manifests in EU authority for the full compass of the system that is not commensurate with accountability and legitimacy for the policy-making entities as such: the flip-side of “common rules without common politics”.

Put differently, we do not have a “European People” or a “European Demos” as the constitutional subject, nor is such a body politic expressed in fullness in any instance of EU politics, including the election of the European Parliament (due to its inherent limitations, especially on constitutional issues).

The EU is a quasi-confederation

This system is akin to a confederation, a league of states bound together by a supra-state level that pursues ends common to the states. The reason we cannot label this Union a confederation proper is because of the nature of European law: a set of inter-state covenants between nation states.

It would have been a confederation if it were founded on a codified corpus of primary law, a constitution, which would provide for a foundational dual sovereignty, of the people and the nation states, that would give rise to the composite sovereignty of the Union as such.

By joining their two capacities they provide the basis for the harmonisation of the interests between space (the Union) and place (the state, the locality). At no point are the states separate from their people and, most importantly, their authority—state sovereignty—cannot be qualified as legitimate or indeed sufficient in the absence of popular sovereignty.

What I consider democratic sovereignty has as its prerequisite the interplay between popular and state sovereignty. To that end, treating the legitimation functions as distinct sovereignties, entails a separation between people and state. But how can there be a republic without a people from whence the res publica comes and where it may be appreciated as such? I claim that it cannot, if said republic is rooted in democracy.

I think that composite states are best designed as federations, where these two functions manifest in the federal administration as well as the bicameral structure of the legislature, forming a unified sovereign whole:

For the time being, the European Union is an inter-state formation, appearing as a quasi-confederation. Judging from the direction of short-to-medium-term integration, its status will not be altered.

Another term we could employ, at least when referring to the European Treaties is inter-statism (I don’t use internationalism due to its connotation as a leftist end—for that I anyway prefer cosmopolitanism).

We should distinguish state from government, since the former remains a contracting party of an international treaty, even if the latter undergoes change: this is in line with the principle of pacta sunt servanda (which is why a certain people cannot unilaterally vote against an international covenant, unless isolation and/or war are to be considered sensible options).

Whatever words we may use, we should try to express the fact that the EU is not a republic and, given its operations over a broad range of policies, it is anything but a typical democracy.

Next:The European Parliament is a real parliament
Previous:About re:publica and the vision for Europe
See all: Blog archive entries