Re: add the Modus themes to base16?

I have received a variant of this a few times already:

Why don’t you add modus-operandi and modus-vivendi to the base16 project? It will give you free access to all the templates it supports. There is no need to manually port them over from Emacs.

For context, base16 is a collection of colour palettes and template files to generate so-called ‘themes’ for a variety of applications. I put the themes in quotes because I think there is an important distinction to be made between a colour scheme and a theme. Read the manual for the technicalities, while I use the remainder of this entry to explain some not-so-obvious issues with procedurally generated ‘themes’:

The origins of the 16-colour palette

base16 is fine in its own right, though it is not the right tool for porting the Modus themes to other apps. The base16 project inherits a constraint from terminal emulators where it expects a palette to consist of 16 colour values. These represent the {0..15} ANSI escape sequences that map to the following terminal colours (termcol for short):

For terminals such as XTerm, URxvt, Alacritty, Kitty, and the like, a 16-colour palette is perfect: it does exactly what it is supposed to, which is to define the colour value for termcol{0..15}. Those will usually produce good results in shell output, but become problematic in ncurses-based programs that want to apply background colours. The reason stems from the very design of the 16-colour palette, where you need to know the base background in order to establish the relationship (i.e. contrast ratio or overall looks) between it, each variant of coloured text, and all coloured texts in tandem. Put differently, the 16-colour palette has implicit rules on its possible combinations where termcol{0,7,8,15} are the de facto backgrounds and all the rest are the nominal foregrounds.

For themes that target an accessible contrast ratio in relative luminance, the actual usable base backgrounds are reduced to two: either termcol{0,8} for dark variants or termcol{7,15} for light ones. Which means that any CLI tool that hardcodes combinations such as termcol0+termcol2 will not look good on a light variant (and the inverse for dark variants).

The 16-colour palette does not grant full control

We can already grasp the implications of this constraint, which are encapsulated in the insight that the designer does not exert full control over their design. The 16 ANSI escape sequences are, at best, a colour scheme which does not determine how values are mapped to constructs in each context.

I state as much from a position of experience, having developed the tempus-themes, which are the spiritual ancestor of the Modus themes for Emacs (also check the tempus-themes-generator for an alternative to base16). My woes with colour inconsistencies stemming from the fragmented landscape of CLI and ncurses-based programs is one of the reasons I switched to Emacs in the summer of 2019 (in previous publications I have explained at length how Emacs furnishes the means for an integrated computing experience).

A practical example with the colouration of diffs

To return to the technical constraints of a 16-colour palette, consider for example, the case of diffs. You have removed lines in red, added lines in green (there can also be yellow lines and other things that need to be colourised, but let’s keep it simple). Check out how Magit (a top-tier Emacs package) displays diffs as sets of hunks that can be acted upon, where the hunk-at-point uses different colours to achieve a highlight effect. In such a context, we need distinct shades red/green (and others) to make the hunk-at-point stand out and/or to dim the other hunks. This cannot be achieved with 16 colours for two reasons:

Despite these constraints, it is common to have terminal emulators colourise diffs. They will either use red/green as foregrounds, which looks okay, or they will invert the colours with red/green working as backgrounds which might look usable though it likely is too intense. Even so, we are dealing with a scenario where we are forced to make the compromise of using colours that are not optimised for their given context. Things get worse when we factor in the need for the visuals of interactivity, à la Magit.

No theme must force itself to the 16-colour palette

There is no technical reason why we should cling on to the legacy of terminal emulators. Programs like Emacs can use colour with greater precision, which helps add much-needed nuance to each interface. We are losing the nuance, the context-specific optimisations, when we force ourselves to conform with the constraints of base16 or the tempus-themes. (Remember to read the entries in the Modus themes’ manual I linked to regarding the distinction between colour schemes and themes, as well as the prospect of a port of the themes to other platforms.)

To illustrate the point of not using a 16-colour palette, consider the differences between the original Solarized by Ethan Schoonover and how it compares to its Emacs port by Bozhidar Batsov, Thomas Frössman, and others. Like base16, Schoonover’s Solarized was also designed with terminal emulators in mind, although it semantically does not provide what terminals expect as termcol{10,11,12,14} since those are shades of gray instead of “bright {green, yellow, blue, cyan}”. Whereas the Emacs port is not a faithful one, as it does not limit itself to the original palette—and that is the right thing to do. Here is a sample from solarized-palettes.el:

These are not all the effective colours of the Emacs Solarized port, as it also has code for colour blending. Still, it is clear that the notion of 16 colours is discarded because it is unsuitable for the demands of a fully fledged theme.

Now let us return to the problems with procedurally generated ‘themes’ from base16 and specifically the idea of getting ports to all those other apps “for free”. Are those templates good for our purposes? With the exception of terminal emulators, which will simply map the colour values to the termcol entries, the answer is negative because each of those templates tries to force a colour palette that was intended for terminal emulators to work as a general-purpose theme. Each of those templates does not consider the contextuality of any given combination of colours. This is not because the people who wrote those templates are careless: it has to do with the fact that the 16-colour palette is not appropriate for all those cases. One size does not fit all.

The quality of ports is something I take very seriously (again, check the links to the Modus themes’ manual). base16 has a port for Emacs, which can help us shed light on another aspect of the design: the overall rhythm of the applicable colours in each context. Compare those two screenshots, which I got from Peach Melpa: 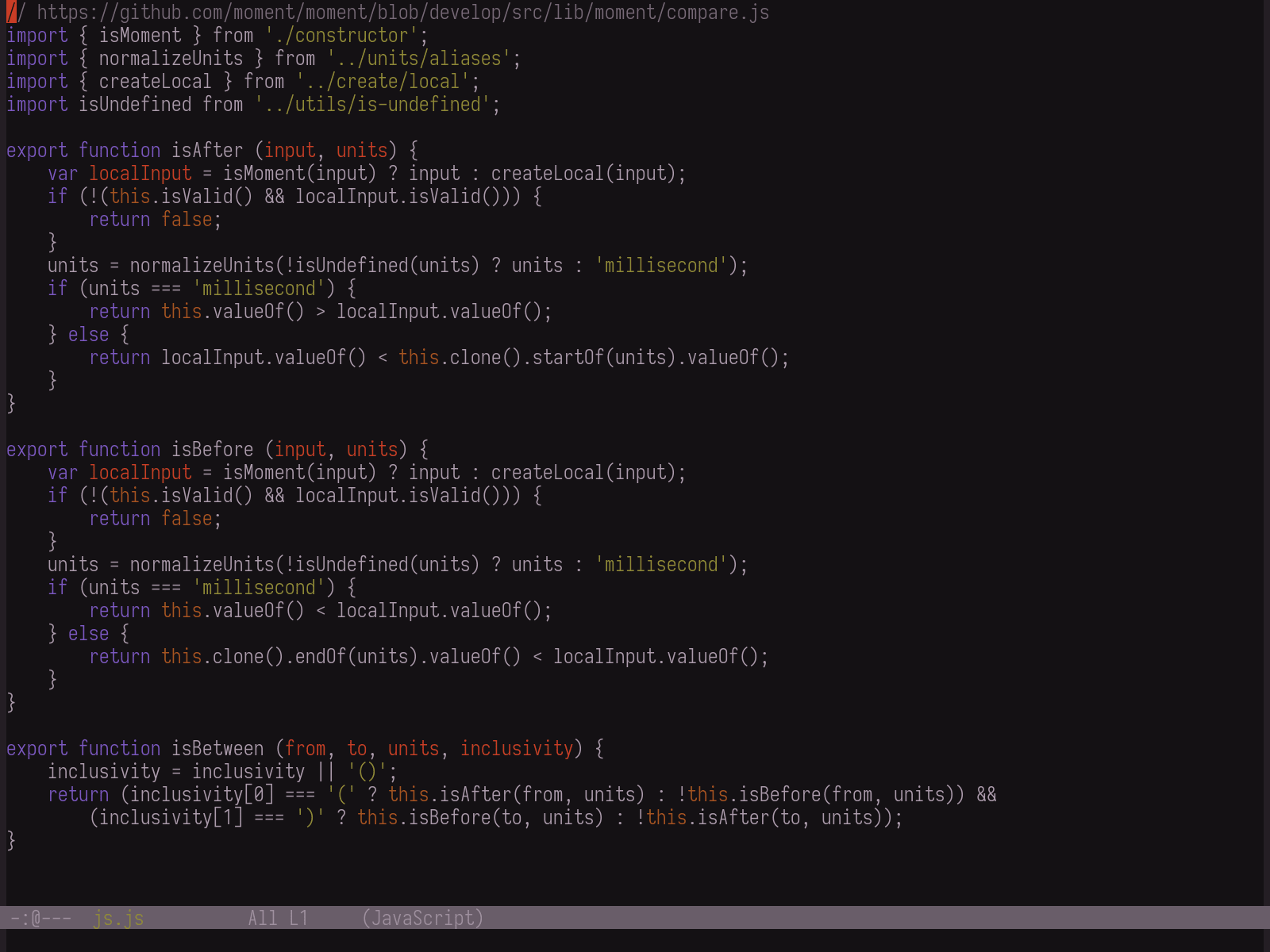 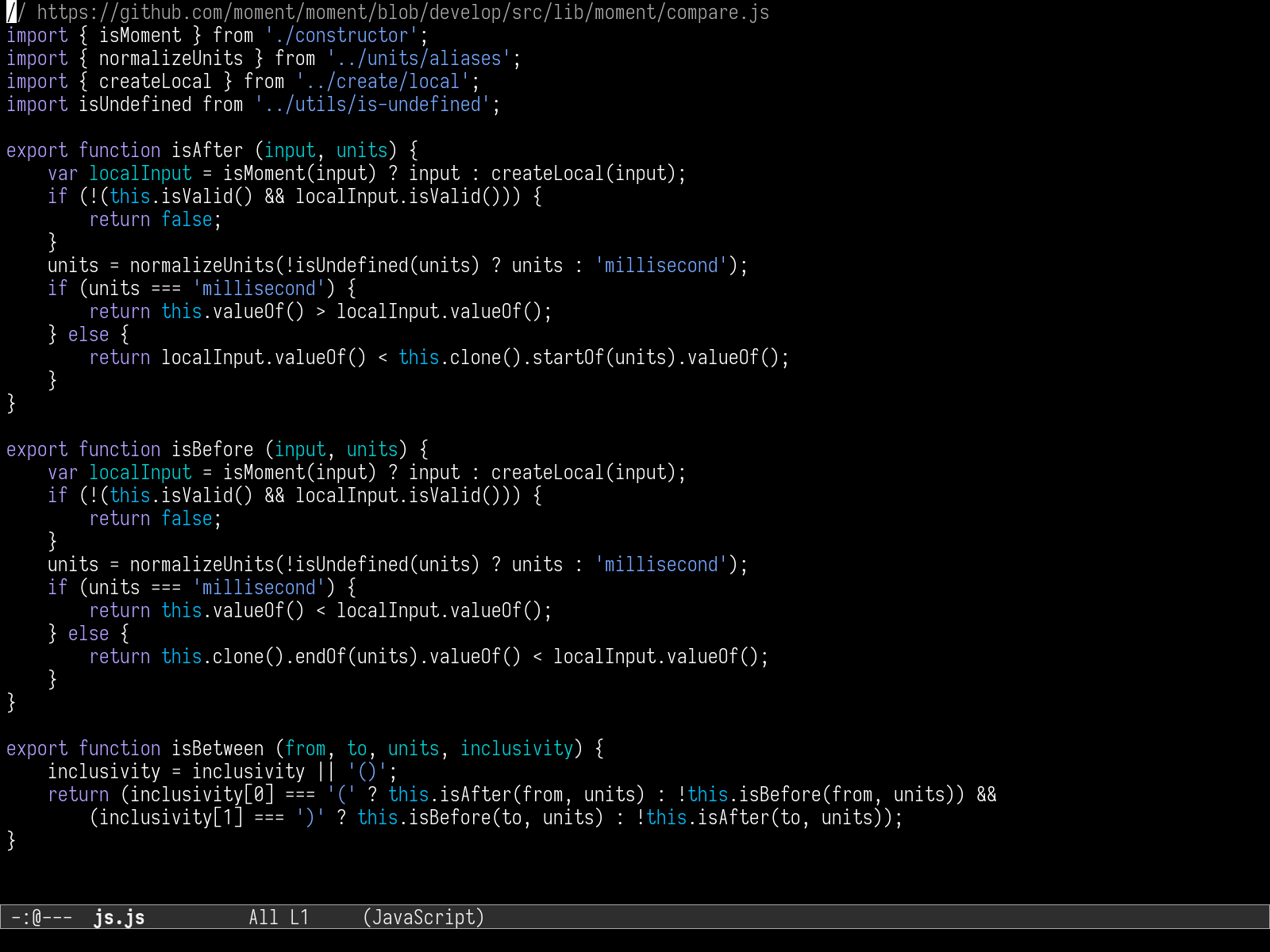 The specific variant of base16 does not matter, as the colour mapping is constant. You will notice that they use in this context purple, orange, red, and yellow. I find this presentation awkward because there is no need to use complementary colours (purple+orange) to amplify the distinction between constructs of the same code. You have those colours effectively shouting at you “hey I am here”. For a theme with subtle colour values, this might not be a major problem, but it would look horrible if we were to apply the intensity of the Modus themes.

Now check how Modus Vivendi uses colour: blue, cyan, purple. We do not have wide differences in hueness because we do not need to exaggerate the distinction between the various constructs. There is no competition at play, nothing to call unwarranted attention to itself. I only use complementary colours (e.g. blue VS yellow) in contexts where the distinction is significant.

Then we have the aspect of colour psychology: the inconsiderate use of red/yellow makes it more difficult to make errors or warnings call attention to themselves.

Anyhow, this is not to imply that the Modus themes are perfect because each major-mode in Emacs will have its own ideas on how faces apply to any given construct. Still, we try our best to optimise the effective colours in their context and thus we do not impose an arbitrary limit on how many colours the palette must have. Without knowing the context, we cannot say anything about the propriety of any given colour combination even if it satisfies the minimum 7:1 contrast ratio that we target.

Some more entries from my themes’ manual:

To be clear: this is not a critique of base16 as the same applies to my own tempus-themes. Read it as the distillation of years of experimentation or, rather, as a warning not to take theme development lightly.

You are still free to use whichever port you want, though I will never debase the quality of this project by supporting ports that are simply not up to our standards (and we haven’t even covered the customisability of the Modus themes and the power it gives to the end-user—again, read the manual).