Starting with commit 29b5e57e to the main branch of the Modus themes, users have the option to customise the presentation of the Org agenda. This will become widely available through upstream Emacs and GNU ELPA in version 1.5.0 of the themes (tentative release frame in early July). The new variable is modus-themes-org-agenda, which accepts an alist where each combination corresponds to specific parts of the agenda buffers. Those parts are parameterised to be styled independent of each other.

First an overview of the user-facing code and then some screen shots:

Those associations correspond in the given order to:

The scheduled and habit keys accept a symbol, as shown in the sample alist above.

This is an agenda buffer without any customisations whatsoever. We use colour to differentiate the various constructs, but try not to overdo it as users’ agendas can be rich with entries and too much colour can be a hindrance to productivity. 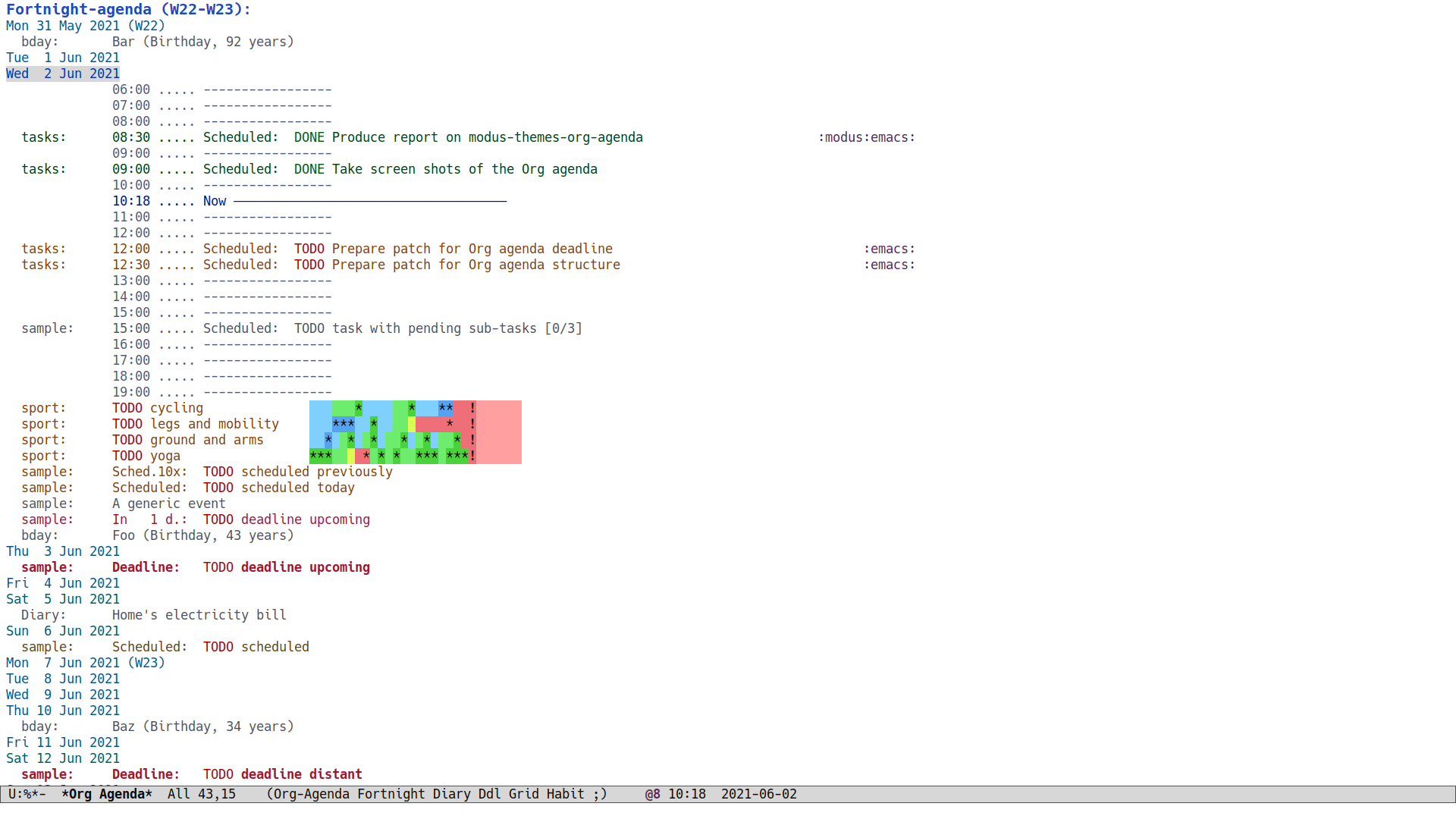 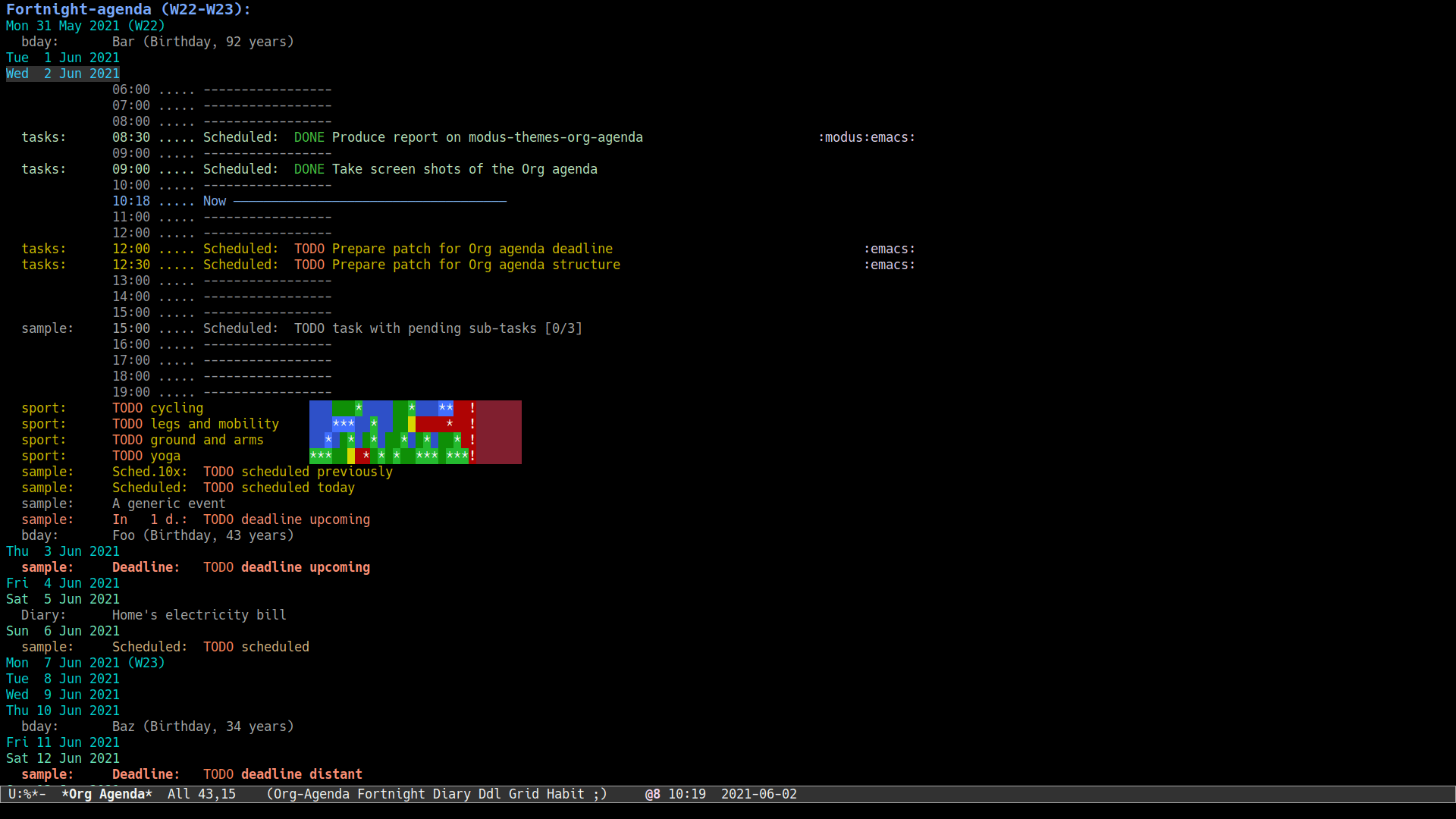 Here is the same agenda view with the following styles (remember to read either the doc string or the manual’s entry on the matter): 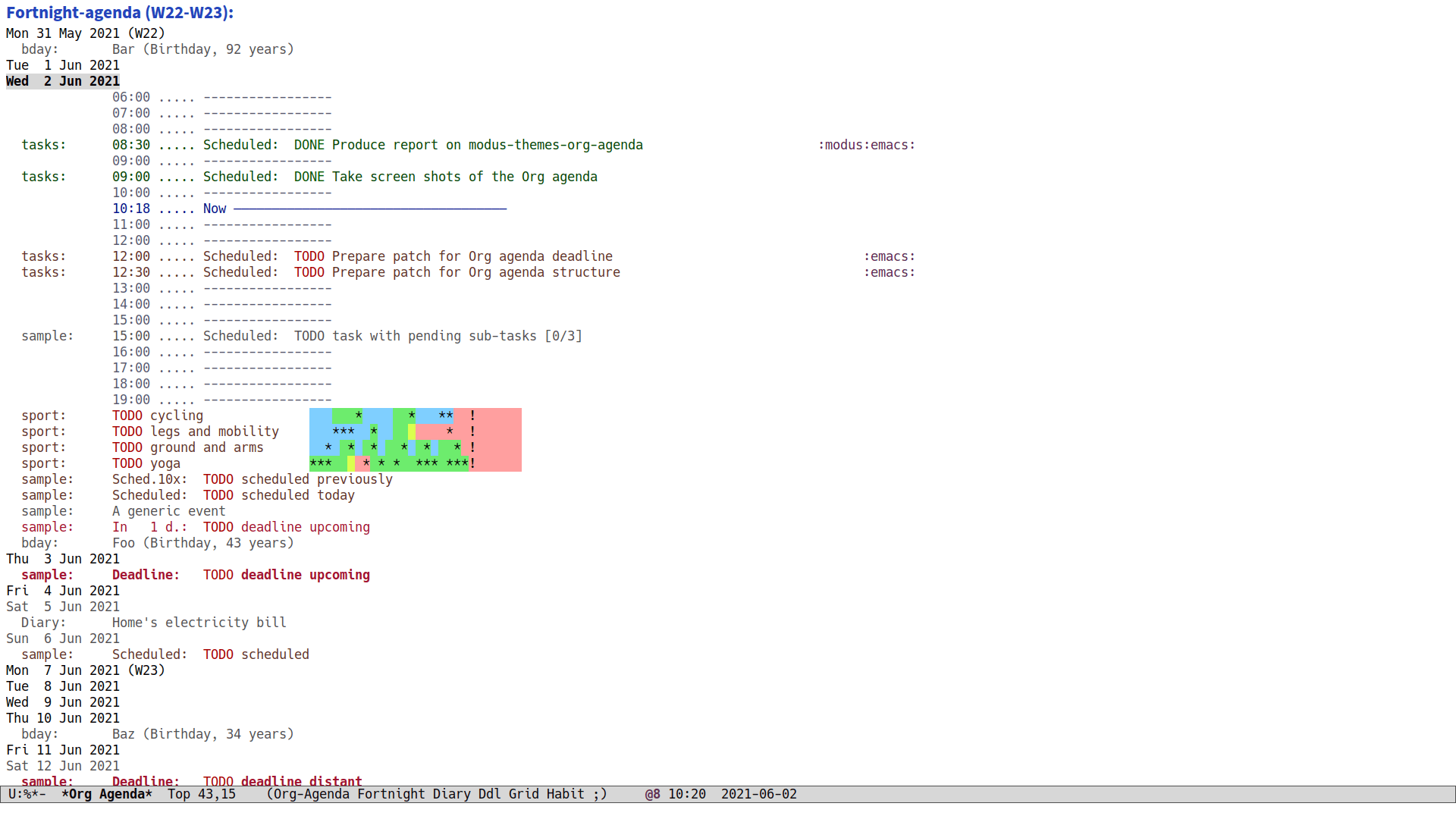 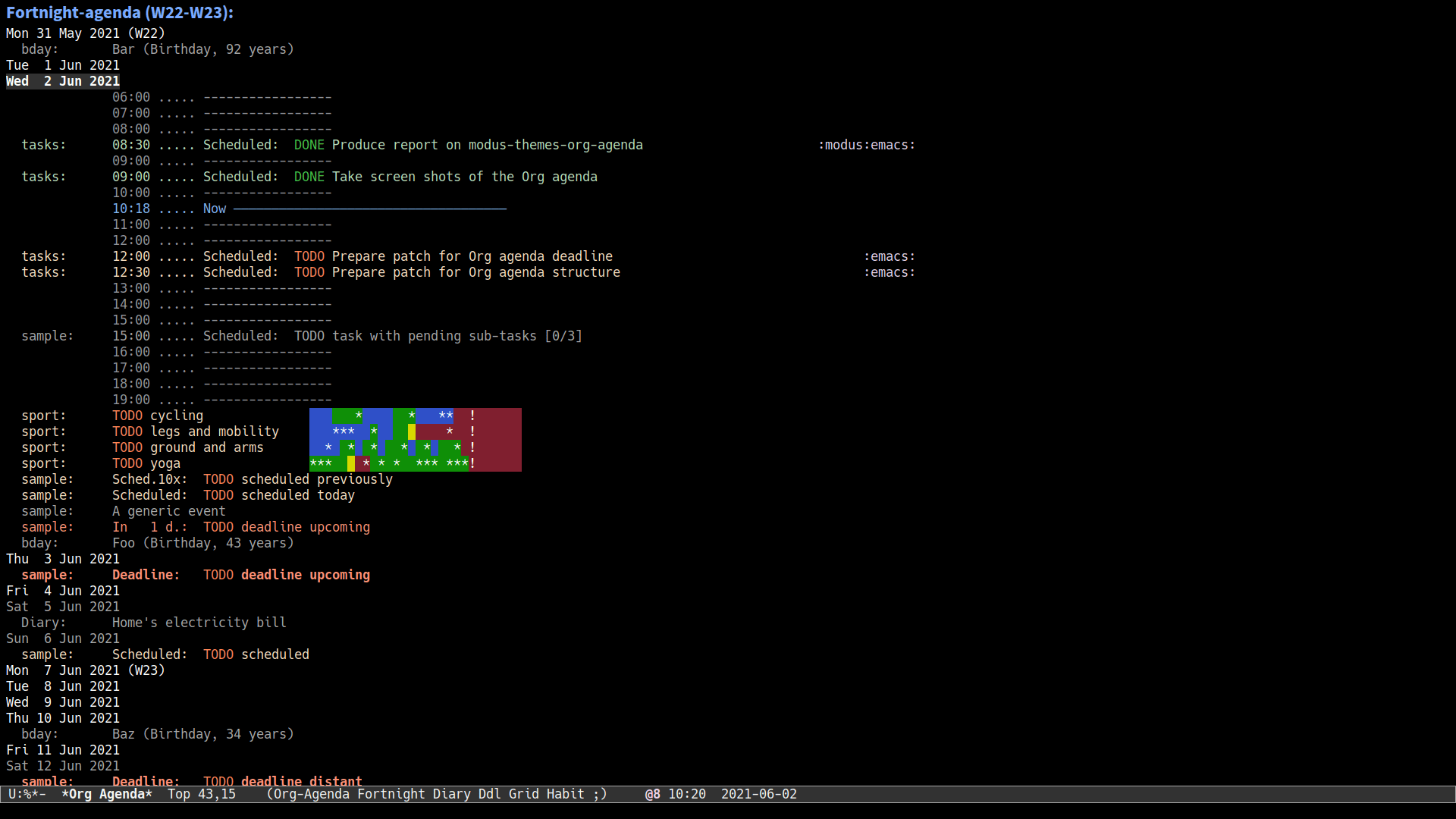 As I have noted before, such as in my latest status report on the Modus themes’ progress, we provide the tools to empower users with red-green colour deficiency (deuteranopia). This practically means to avoid unconditional colour-coding that relies on a distinction between red and green, by substituting green with blue. To that end, the themes provide modus-themes-success-deuteranopia (e.g. for Org “DONE” tasks or Isearch matches) and modus-themes-diffs which has relevant styles with a red-blue design.

For modus-themes-org-agenda, the only place where we need to introduce such an alternative is for the org-habit graph. We do so by tweaking the traffic-light style/workflow as traffic-light-deuteranopia: it uses red, yellow, and blue to present its indicators.

With those configurations we get the following samples: 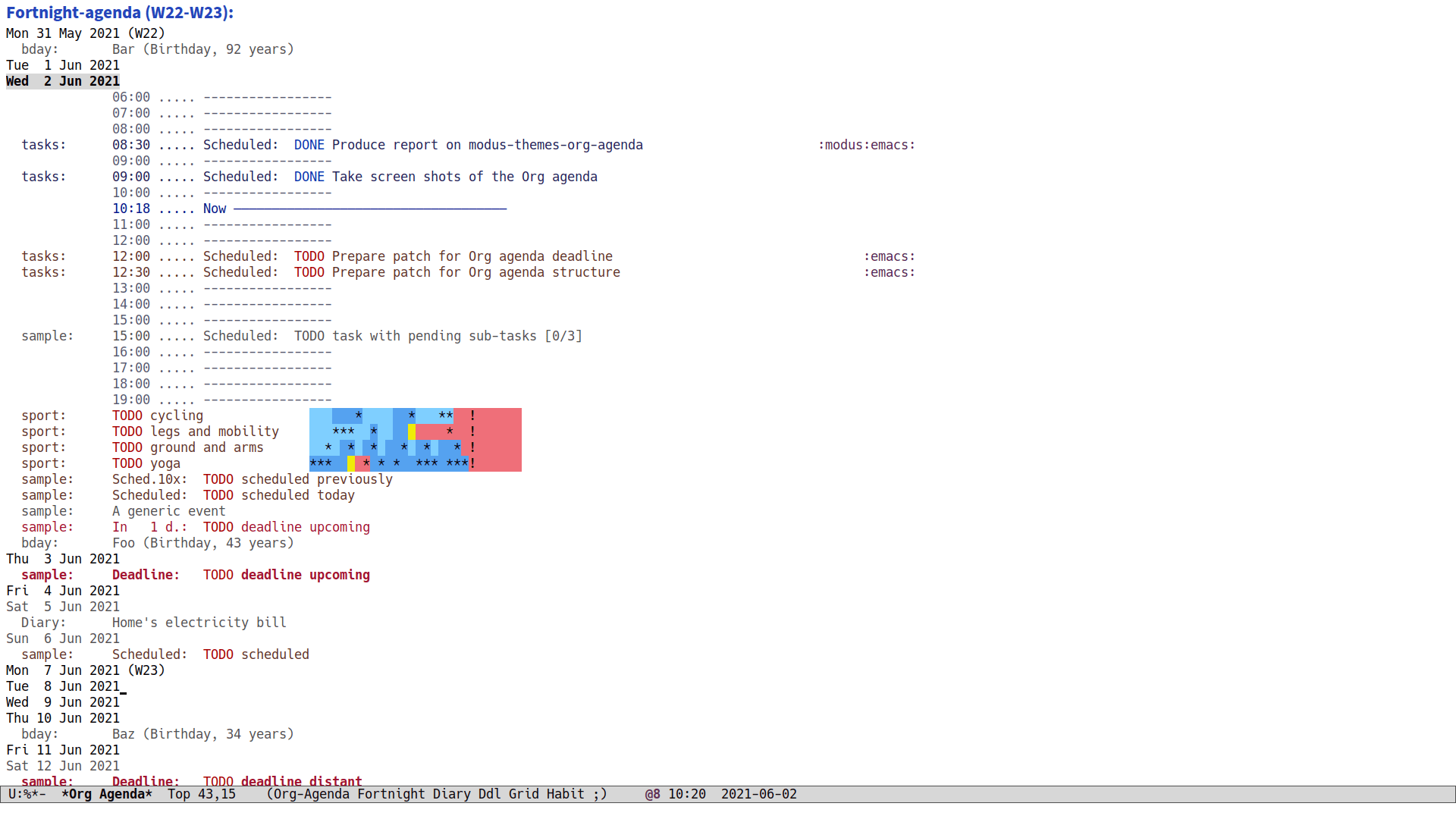 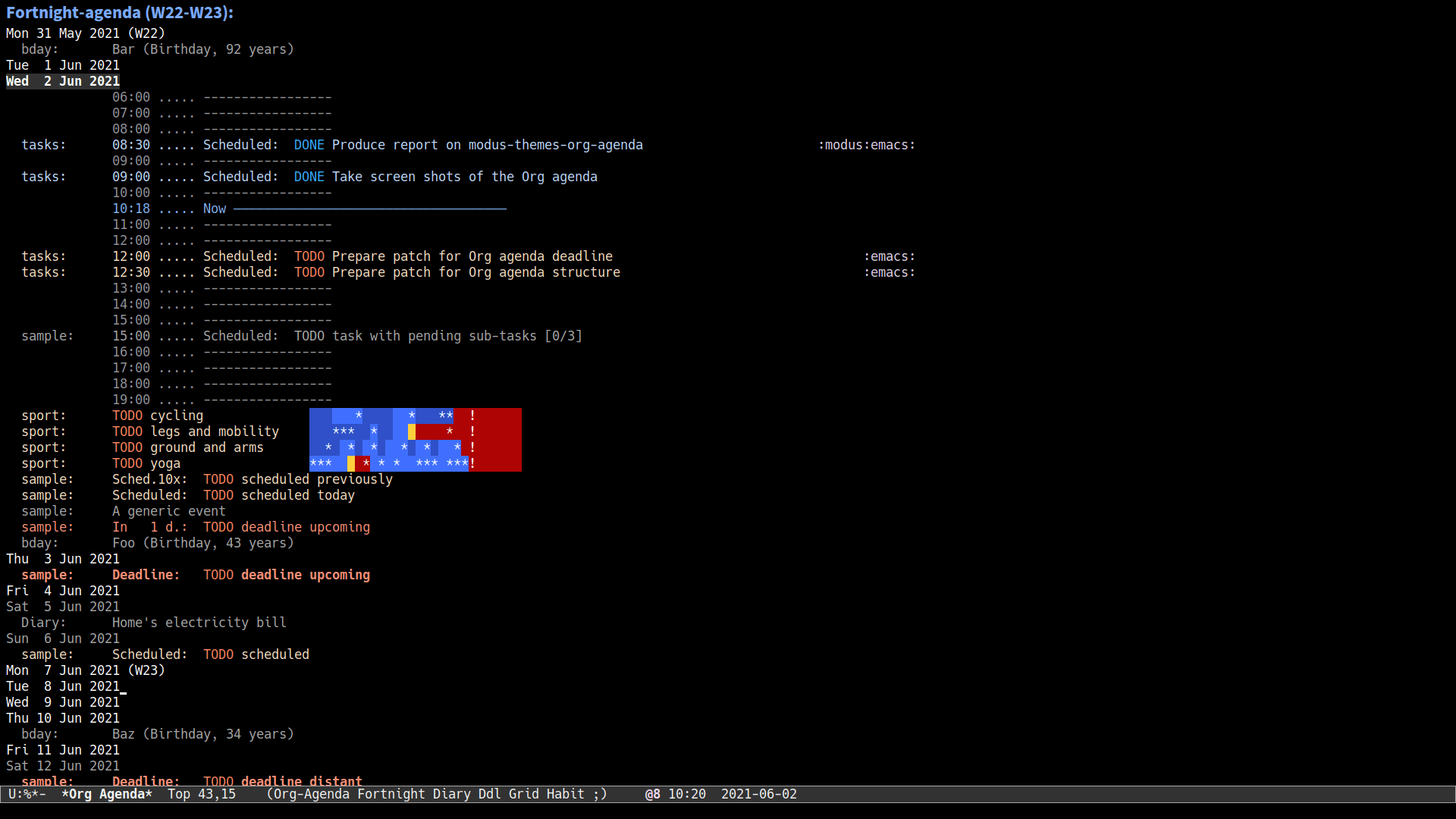 To develop this variable, I benefited from the insights, commentary, suggestions, and testing of Gustavo Barros in issue 208 (the discussion has over 200 comments as of this writing). Gustavo put forward the idea of reviewing the old defaults, which eventually led us to the realisation that only a new customisation option would suffice; an option in the form of an alist to offer us maximum flexibility.

Internally, the design of modus-themes-org-agenda draws from the in-progress patch of Philip Kaludercic on the redesign of compound values for the numerous customisation options the themes provide, starting with modus-themes-mode-line (refer to the discussion in merge request 40).

Through the discussion with Gustavo, we also identified areas where Org itself can be improved. Those will be formalised as patches and sent to the maintainers. Their basic idea is to implement faces that are optimised for their context in the agenda buffers. I shall work on those as soon as I am done with this report and will write about them in those web pages after they are accepted by upstream.

In short, we pay attention to detail and want the best possible result for all users. Thanks again to Gustavo for the fruitful collaboration thus far and thanks in advance to Philip for the forthcoming patches!

NOTE: The modus-themes-org-agenda supersedes the now-deprecated modus-themes-org-habit. Users of the old variable can get the exact same styles by controlling the habit key inside of the new alist, with possible values still being the same as before, plus the deuteranopia-optimised addition, namely: nil (default), simplified, traffic-light, traffic-light-deuteranopia.